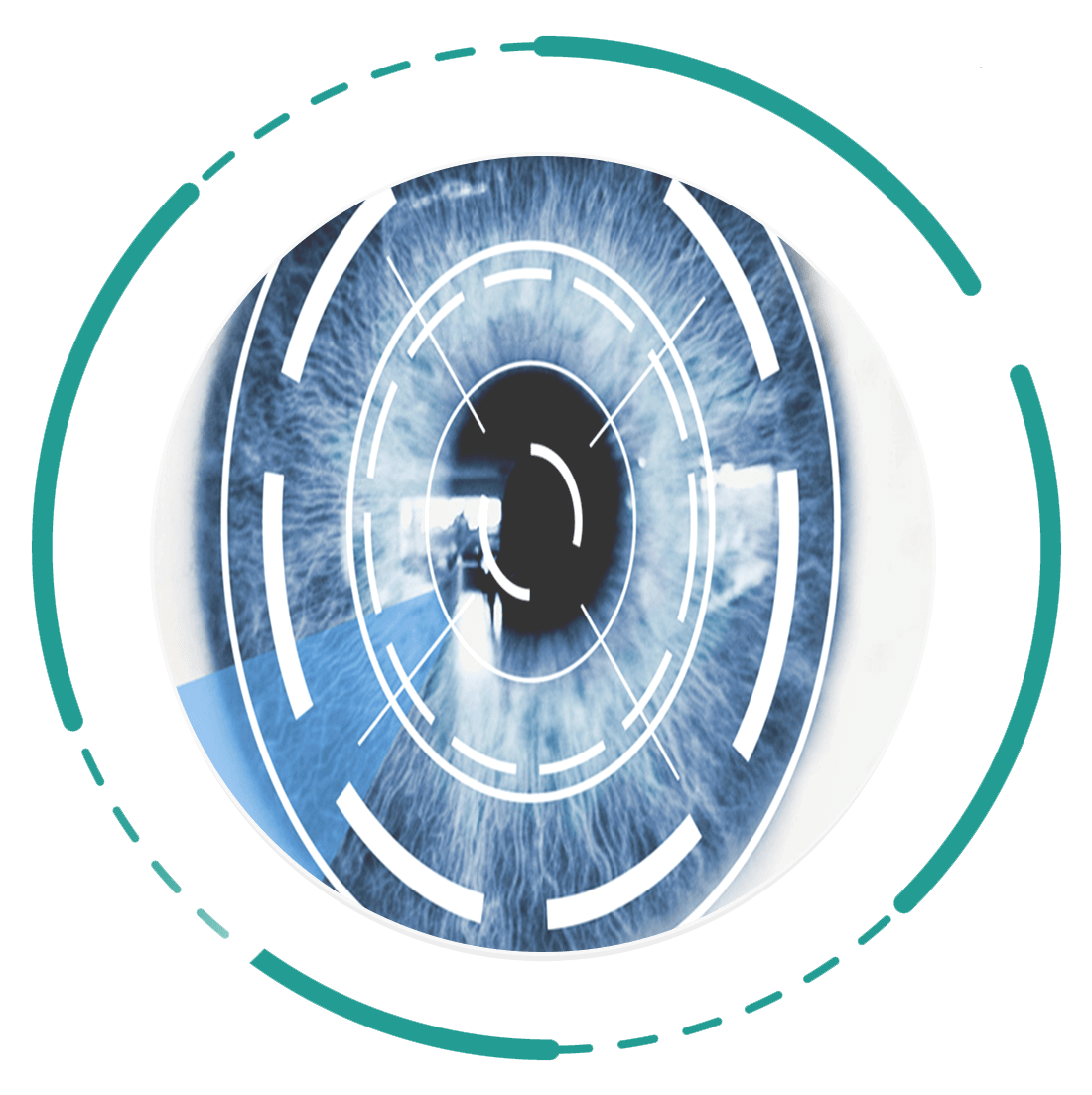 Photorefractive keratectomy (PRK)
PRK (photorefractive keratectomy) is a type of refractive surgery for the treatment of myopia, hyperopia, and astigmatism. PRK surgery is the first type of laser eye surgery to treat vision loss and was used before the popular LASIK procedure. Although PRK recovery is slightly longer than LASIK surgery, PRK is still common and offers more benefits than LASIK for some patients. LASIK and other types of laser eye surgeries, such as PRK (PRK), operate by deforming the cornea using an excimer laser and allowing light to reach the eye to focus precisely on the retina.
How is PRK surgery performed?
Initially, the surgeon sterilizes a central part of the corneal epithelium with an alcohol solution, a "buffing" device, or a surgical instrument. An excimer laser is then used to correct the curvature of the corneal surface. It is a highly specialized computer-controlled laser that displays cold ultraviolet light pulses that remove microscopic amounts of tissue in a precise pattern. Then a soft-bandaged lens is placed on the cornea to protect your eyes. The new epithelial cells grow for about four or five days and eventually the bandage is removed by the surgeon. You will be alert during this procedure, but the surgeon may prescribe a sedative to keep you calm.
Femto LASIK
Femto LASIK is one of the most common, precise and safe methods of refractive surgery.
Femto LASIK which is one of the most common, most accurate and safe methods of refractive surgery, is a two-stage surgery performed on the individual's cornea. Femto LASIK is one of the newest methods of correcting myopia, hyperopia, and astigmatism.
The femtosecond laser has various applications in ophthalmology. Currently, its most common use is for corneal incision during Femto LASIK surgery, which can be termed the superior LASIK form. The femtosecond laser is a major development in material cutting technology. Each infrared laser pulse of a femtosecond laser is only a few femtoseconds (10-15 seconds) and therefore, there is no chance of damage to the lateral areas and it is very accurate.
Femto LASIK Surgery Technique
In terms of the surgical procedure, Femto LASIK is very similar to LASIK except that in LASIK, the corneal incision is made mechanically using a blade and a microkeratome. But the same procedure is done in Femto using a laser with more acceptable thickness and extremely high accuracy. Currently, Femto LASIK is one of the most popular methods of refractive correction in Europe and the US. Femto LASIK is performed in the following four steps:
Smile
LASIK surgery with femtosecond laser has been common for a decade, but today a more advanced and sophisticated model of surgery called smile (small incision lenticular excision) can be used. The smile technique is derived from a method called ReLEx. In this technique, only one femtosecond laser is used, which reduces the cost, side effects and surgical time significantly.
Smile eye surgery is the latest surgical procedure to remove myopia and astigmatic refractive errors using the femtosecond laser. It works better for people with dry eyes than LASIK.
How is the Smile surgery performed?
In the smile technique, using only a femtosecond laser, a very thin disc called the lenticule is separated from the internal corneal tissue. The disc is then removed by making a very small incision. This method of eye surgery is used to mildly correct the cornea and can also help relieve myopia. The smile procedure is completely done without corneal flap or tissue evaporation, so it can be said to be less invasive and disruptive than LASIK.
Cataract Surgery
Cataract refers to the opacification of the lens of the eye, which may increase with age. Symptoms include diplopia, seeing a halo around the lamps, Reduced night vision, yellowing colors, seeing Smooth surfaces curved, etc. the disease is both congenital and acquired, and there is no effective drug treatment which makes surgery the best and only approach.
In cataract surgery, an opaque lens is replaced by a synthetic lens. The technique used for cataract surgery is a phacoemulsification technique. By the use of ultrasound waves, the patient's defective opaque lens is removed through an incision of approximately 3 mm; Then, it is replaced by a translucent synthetic lens (artificial lens), this takes about 10 to 15 minutes. This surgery usually requires no stitches or general anesthesia and it is possible with local anesthesia.
Artisan and Artiflex implantation
The vision problem of patients with severe hyperopia or myopia or with insufficient corneal thickness for laser correction can be corrected by applying a special intraocular lens to the refractive error without removing the normal lens of the eye.

Read More
Trabeculectomy (glaucoma treatment)
Glaucoma is a condition in which the optic nerve is damaged by factors such as increased intraocular pressure (or, briefly, eye pressure). Since the optic nerve is responsible for transmitting visual information to the brain, its damage (gradually) causes the field of vision to fail and, if left untreated, can eventually lead to complete blindness.
Symptoms of glaucoma vary by type: Trabeculectomy surgery is the most common non-laser surgery to relieve intraocular pressure that treats glaucoma. In this surgery, a canal is inserted into the internal fluid outflow to remove excess fluid into the eye and removes part of the outflow system to repair the eye. After this surgery, drugs such as antibiotics and pupil diluents are prescribed and glaucoma medications are discontinued. This surgery is suitable for people with very advanced glaucoma who are not responsive to laser therapy and can greatly improve and cure the disease.
Intrastromal Corneal Ring Segment (ICRS)
A small device implanted within the eye to correct vision. This procedure is performed by an ophthalmologist who works with a small incision in the cornea of ​​the eye, two crescent or semicircular rings like between layers of the corneal stroma, one on both sides of the pupil. Corneal implantation, as well as refraction of refractive light, are embedded in the eye
Inter-stromal corneal rings were originally used to treat mild myopia. To this end, they have been largely replaced by excimer lasers, which are more accurate. They are now mostly used for mild to moderate keratitis
The most important benefits of an intra-corneal ring are summarized in three points:
Strabismus
The condition in which the eyes are not in the same direction and do not look at one object at the same time is called strabismus. Deviation of the eye may be inward (esotropia), outward (exotropia), high (hypertropia) or low (hypotropia). Sometimes a combination of these may also appear in the individual. Strabismus is common at an early age but may also occur in adults.
The main symptom of strabismus is actually an eye that is not in place. Sometimes a child closes his or her eyes in the sun and sometimes tilts his or her head to a special occasion to try to use both of his or her eyes. Severe eye fatigue and headache are also seen during eye activity and sometimes symptoms of lack of a proper depth of vision are seen. Adults who develop strabismus also often complain of double vision.
Strabismus Surgery
The eye never gets out of place during any surgery. Strabismus surgery is a small incision in the lining of the eye that allows the ophthalmologist to access the underlying muscle. Which muscles undergo surgery depends on the direction of rotation of the eye. Sometimes, both eyes need surgery. Anesthesia is necessary for strabismus surgery in children, but adult surgery with local anesthesia is also possible.
Recovery is fast. The individual often returns to his or her normal activities within a few days. After surgery, the use of glasses or a chart may sometimes be necessary. Sometimes the correction may be more or less than the desired value, in which case further action will be necessary.
Blepharoplasty
Aesthetically, the eyes are the most important part of the face. The eyes in many cases reflect the age of the individual and even reflect his or her emotional and mood states.

Read More
Dacryocystorhinostomy (DCR)
The nasolacrimal ducts are part of the body's system for draining tears from the eyes. When the tear ducts are blocked, it causes an accumulation of fluid in the tear sac that can cause infection. Tears are usually discharged through small tubes called the tear ducts, which are drawn from the eye to the nose. If the tear duct is blocked or unable to open, tears cannot be properly removed. The conduit may be filled with fluid and swollen, inflamed and sometimes infected.

Read More
Retinal Detachment (RD)
The retina is a thin, transparent layer of light-sensitive tissue that covers the inner part of the eyeball, and the image of the outside world is formed on this sensitive layer, which sends visual messages to the brain through the optic nerve. The optic nerve is the interface between the brain and the eye.
The term retinal detachment refers to the detachment of the sensitive retinal layer from the underlying layer, and thus the image of the outside world on it is not well-formed, disrupting the field of vision and resulting in severe vision loss and ultimately if left untreated blindness.
What are the symptoms of retinal detachment?
The sudden appearance of blotches or flashes of light or fluttering in the field of vision can be signs of rupture or retinal detachment. Occasionally, retinal detachments can occur without the observation of flywheels and light sparks, and in such cases, the patient will notice a wave or flood in his vision or the appearance of a dark shadow in part of his peripheral vision. Further progression of the retina slows down the central vision and causes considerable damage to one's vision. Retinal blindness is almost an emergency condition, and anyone who sees signs and symptoms of retinal deterioration should see an ophthalmologist immediately for a thorough examination.
treatment of retinal deterioration
Treatment depends on the type of retinal detachment. In the early stages of retinal detachment, it can be treated by laser retinopathy or cryopathy. These are usually performed, outpatient. During laser surgery, small burns occur around the edge of the rupture, which prevents the fluid from passing through the eye and accumulating under the retina. In cryoprecipitate, they freeze around the hole in a similar way.
The patient should be hospitalized for the treatment of retinal degeneration with surgery. The surgery varies depending on the type, extent of detachment, and rupture.
Corneal Transplant surgery
The cornea is the transparent part of the front of the eye that allows light to enter the eye.
Corneal transplantation or Keratoplasty is a surgery in which a damaged cornea is replaced with another donated cornea instead of one part of the entire cornea. A transplanted cornea is removed from a deceased person who has no known illness or other indications that endanger the transplant recipient's health.
The surgery is performed by a specialist ophthalmologist of the corneal transplantation under general anesthesia. In certain cases, it can also be performed under local anesthesia with a sedative and hypnotic injection.
Eye examination
An eye examination is various tests that all people should do regularly and periodically. The eye is one of the most important organs of the human body, therefore the eyes should be examined regularly from birth to adulthood. It should be noted that the eye examination is different from the vision test. In addition to vision testing, the ophthalmologist also examines the eye for diseases that do not have early symptoms.

Read More
Lid deformity surgery
Puffy eyelid surgery
What is the procedure for puffy eye surgery?
Eyelid surgery is performed to treat eyelid drooping or fat hernia from the inside of the eyelid into the eyelid. As the skin ages, the eyelid becomes drooping and the hernia from the back of the eye to the forefront causes puffiness and prominence in the upper or lower eyelid. Be in front of the field of view and disrupt one's vision.