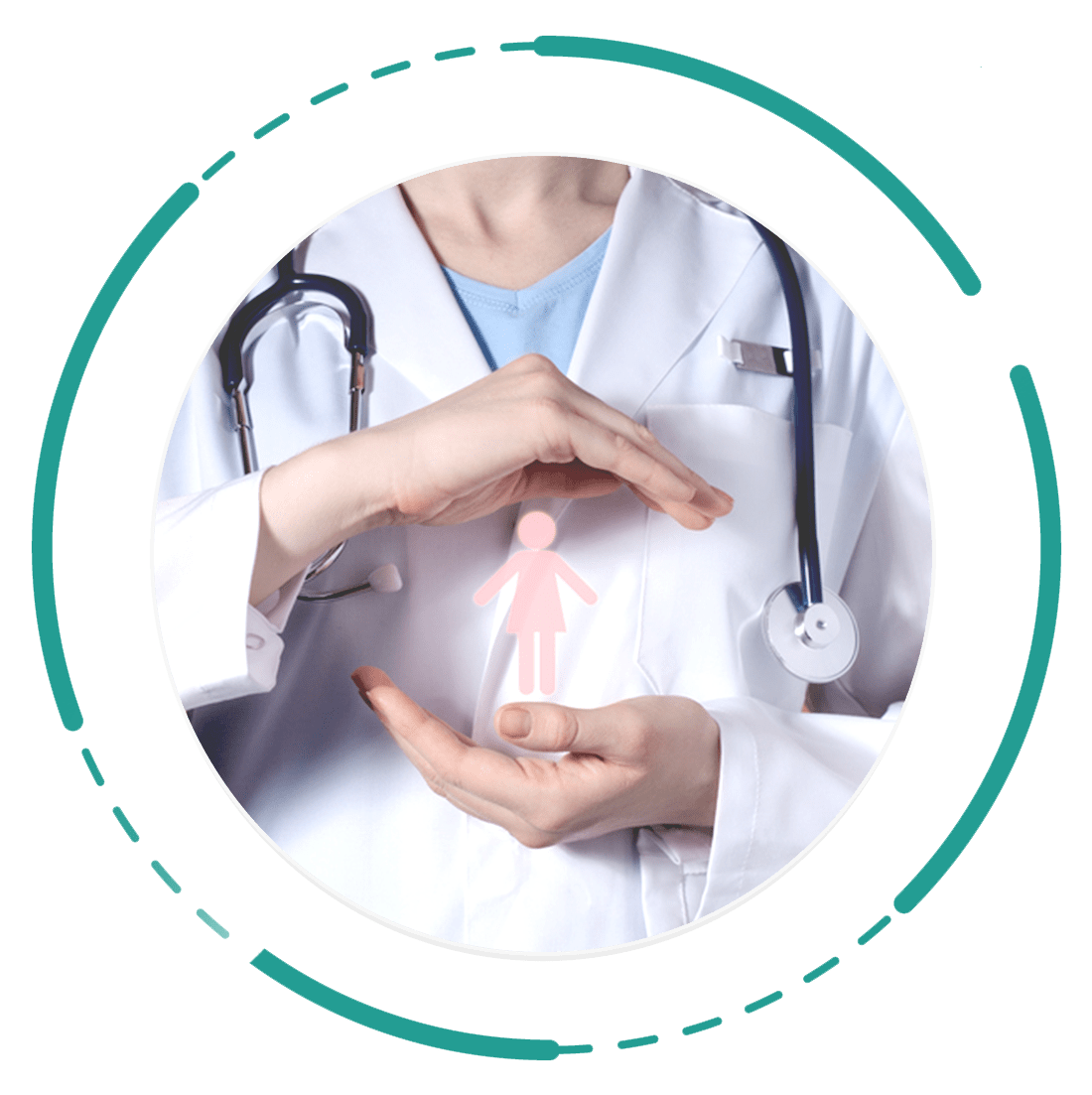 Cervical dysplasia
Cervical Dysplasia, the abnormal cell growth at the cervical surface, is a prognosis of cancer and if left untreated can lead to cervical cancer. The cervix is ​​a small cylindrical limb that contains the lower part of the cervix and allows the central canal to pass menstrual blood, sperm, and neonate at birth. The canal and the outer surface of the cervix are covered by two types of cells: a) mucus-secreting cells and b) protective cells.
Cervical dysplasia is associated with abnormal changes in these cells. Although these changes do not cause symptoms, it can be identified by Pop smear test long before cancer cells form. With timely diagnosis and treatment, the result will be great.
Chorionic villus sampling
Chorionic Villus Sampling, or CVS, is a diagnostic test to diagnose congenital defects and chromosomal abnormalities such as trisomy 18 and Down syndrome. To perform this test, remove a small sample of placenta cells or villi at the placenta attachment to the uterine wall. Placental villi are a small part of the placenta that contains genes similar to fetal genes. If the mother is classified in the high-risk group in the first trimester screening test, the clinician may recommend a CVS test for definitive early diagnosis of the problem. The CVS test also identifies the gender of the fetus, which can identify gender-related disorders, such as certain types of analysis or muscular dystrophy that occur most frequently in male fetuses.
Ventrosuspension
Some women, especially after childbirth, experience bladder problems. The surgeon uses a variety of methods to restore the bladder to its original position and to hold it in place; the three main surgical procedures are performed with retrospective suspension technique and two with a slinging technique.
Hysteroscopy
Hysteroscopy Hysteroscopy is a type of surgery in which a telescope (a rod-shaped instrument at the end of a camera) enters the uterus and examines the internal cavity of the uterus. This can detect abnormal uterine conditions: Subcutaneous myomas (intrauterine) Adhesion of the walls of the uterus to one another Polyp Intrauterine Wall Congenital malformations of the uterus So hysteroscopy is a diagnostic-therapeutic method that is used in gynecological diseases and infertility.
In the following cases, your doctor may recommend this:
Abnormal bleeding (severe or prolonged uterine bleeding, bleeding between menopause and postmenopausal hemorrhage)

In infertility cases, hysteroscopy is used to find the cause of infertility and to remove uterine adhesions. The septum or intrauterine wall is an important cause of recurrent miscarriage in many patients, which can be diagnosed and treated by hysteroscopy.

Colporhaphy
Colporrhaphy or Vaginal canal repair is a surgical procedure in which one of the defects in the vaginal wall is repaired. This procedure is used for both bladder and rectal hernia cases.
Pelvic organ prolapse and urinary incontinence are among the factors that cause sexual dysfunction. Anterior and posterior Colporrhaphy surgery is one of the treatment modalities for these problems.
Abdominal hysterectomy
Surgery of Uterine and cervical removal. The ovaries and tubes of the uterus may be removed or left over depending on the type of hysterectomy. Hysterectomy is usually performed because of prolonged and painful bleeding, pelvic pain or cancer treatment. It is performed in different ways depending on the medical history and doctor decision.
Abdominal hysterectomy: The doctor makes a cut at the bottom of the abdomen.
Vaginal hysterectomy: In this procedure, the uterus is removed by making a small incision in the vagina.
Laparoscopic hysterectomy: Laparoscopy is a small, light-tube device that allows your doctor to see your pelvic organs. During laparoscopic hysterectomy surgery, the uterus is removed through small incisions made in your abdomen or vagina.
Laparascopic hysterectomy
hysterectomy or surgery is called surgery where the uterus is removed. This is the most common procedure performed by a gynecologist in either complete (trunk, fundus and cervix) or partial (do not remove the cervix).
After the uterus is removed, the woman loses the ability to conceive
Laparoscopic hysterectomy: Laparoscopy is a small, light-tube device that allows your doctor to see your pelvic organs. During laparoscopic hysterectomy surgery, the uterus is removed through small incisions made in your abdomen or vagina.
Dilation and curettage
Dilation" implies that gap the cervix to widen or dilate it, and "curettage" implies that shaving or removing a specimen from the tissue layer or internal tissue of the feminine internal sex organ for ulterior examination.
Dilation and curettage might even be performed to sight and confirm the causes of abnormal hemorrhages. throughout this procedure, a sample of feminine internal sex organ tissue is taken associated examined beneath a scientific instrument to figure out if there is an associate abnormal cell. The procedure is to boot performed once a girl has an associate abortion, if there is a unit residual maternity merchandise among the feminine internal sex organ they are removed by surgery and dilation since staying within the tissue can cause infection or excessive hemorrhage
Amniocentesis
Amniocentesis is a prenatal diagnosis procedure in which fluid around the fetus is removed and sent to the genetics laboratory for diagnosis of chromosomal and genetic abnormalities and fetal neural tube defects. Live. Embryonic cells, proteins, and embryonic urine are also present in this fluid. .
How to perform amniocentesis:
Amniocentesis is a procedure in which a small amount of fluid around the embryo (amniotic fluid) is sampled. Amniocentesis is performed at the doctor's or hospital's office and is usually performed between 15 and 21 weeks of gestation..
When performing an amniocentesis, the doctor uses an ultrasound monitor that provides a clear picture of the fetus's status in the uterus as well as the amniotic fluid. After viewing the image, the doctor will insert a very narrow needle through the abdomen into the womb of the pregnant woman and will extract about 20 ml of amniotic fluid. This process will take only a few minutes.
Endometrial ablatin
Endometrial ablation is more commonly used in women who suffer from heavy menstrual bleeding where medical treatment has not been effective for them and they do not wish to undergo a hysterectomy.
By using various techniques, the doctor permanently removes the uterine lining (endometrium). After endometrial ablation, many women will have much lighter menstrual periods. Pregnancy after endometrial ablation can jeopardize one's health, as women should take safe or permanent contraceptive medications until menopause.
Salpingo-oophorectomy
Salpingo-oophorectomy or removal of the ovaries and fallopian tubes is done in many cases. Including cancer, ovarian cyst or prevention of ovarian cancer.Women who have to undergo the surgery often have breast cancer. Also in women with a hereditary background of breast, the uterus or ovaries cancer, and given the risk of ovarian cancer in breast cancer patients which is 40% more, This surgery is a life-saving option.
For more information, please feel free to contact us.
Rating: 5.00/5. From 16 votes. Show votes.
Please wait...